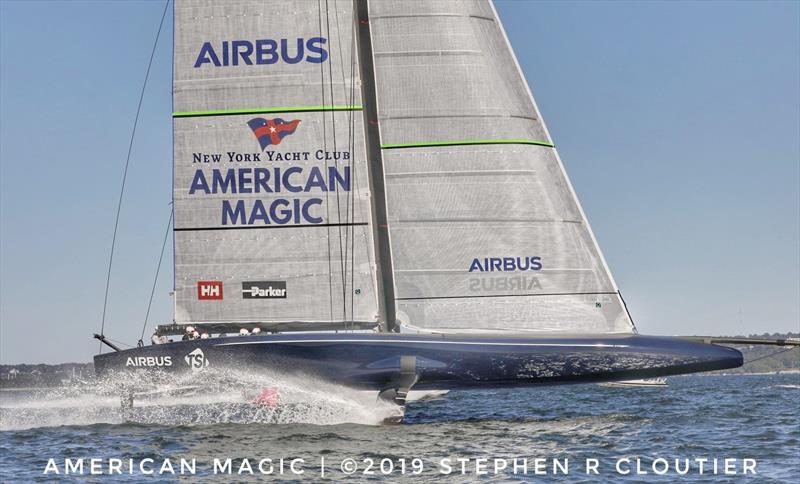 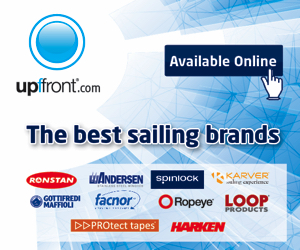 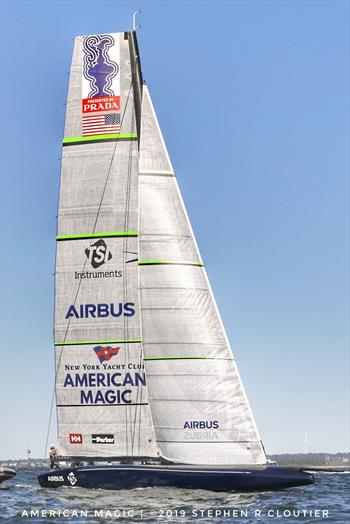 
The second AC75 to be launched and first to sail, NYYC American Magic, was caught on camera by several media during a regatta on Narragansett Bay, Newport RI.

Previously just a few shots had leaked on the the web, along with two official shots from the team.


Media at the regatta were given a fly past by the AC75, sailing fast in a 12-14kt breeze and flat water.


The foiling monohull appeared to be very stable a video filed by Mark Mills on Facebook as the AC75 did a run in 12-14kts of breeze, including an attempt at a foiling tack at the end of the run.


The most unusual shots are of the AC75 under tow where her scow-like full shape is revealed – shot from ahead of the boat, rather than astern as in the official sailing shot, released by the team on Wednesday.


The AC75 Class Rule prevents “scow-bows” by setting two maximum beam measurements within the first three metres of the hull – creating a rather unusual bow treatment on NYYC American Magic.


The design approach taken by her design team assisted by design partner Airbus shows a very wide flat hull – even allowing for camera lens distortion. That is quite a different approach to that taken by the Emirates Team New Zealand design team who have opted for a more traditional hull shape, with multi chines, and a bustle running partway down the centre of the hull, producing a distorted underwater shape.


The NYYC American Magic shape is more stable at low speeds but will have more drag because of increased wetted surface. It would seem that the offset for that is to get the boat heeling as much as possible, get her riding on her leeward bilge to reduce wetted surface and induce foiling as quickly as possible.


Shots taken at the American Magic base show the two teams, American Magic and Emirates Team NZ have taken completely different design approaches. While ETNZ’s Grant Dalton described their design as “extreme” the design team at NYYC American Magic along with partner Airbus, have also produced what many would consider to be an extreme design approach in their hull. The rigs also will be quite different, with American Magic opting for a conservative rig, while the Kiwis are expected to unveil a deck sweeper mainsail, without a convention main boom and sheeting.


One of intriguing possibility of the beamy flat hullshape is whether the boat will be able to benefit from ground effect aerodynamics – a question best answered by the Airbus team – but if present it does reduce induced and creates lift, as the boat/plane effectively rides its own air bubble across the water. In fighter planes the effect cuts in when the aircraft is one wingspan above the ground or water.


This second video shows the AC75 in steady flight, and at the end a foiling gybe is attempted, which ends in a soft landing at the exit, after the old foil wing is raised.


The most significant point of difference between the foils on the two AC75’s launched to date, aside from the differences in hull design, is the approach with the foil fairing and foil wing. While the carbon foil arm is one design and a supplied part, the teams are free to add whatever fairing they wish. With the foil wing, it must fit within six-sided template outline, otherwise it is free design. The foil wing is allowed to weigh up to 740kg, and when not being used as a foil is canted to windward to provide righting moment.


Under the current version of the Protocol which governs the America’s Cup there is virtually no restriction on photography, the detail revealed in the American Magic images is less than revealed by Emirates Team New Zealand at their launch a week earlier, and a spy boat complete with photographer said to be from Italian Challenger Luna Rossa was in close attendance when ETNZ were Te Aihe was sea trialing last Wednesday. 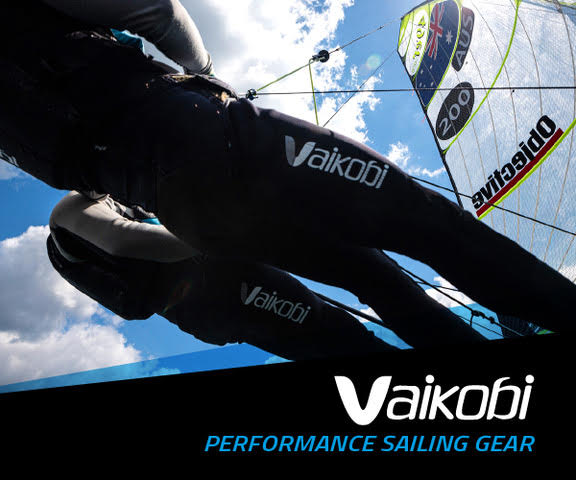 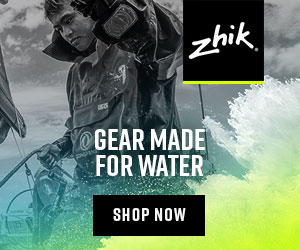