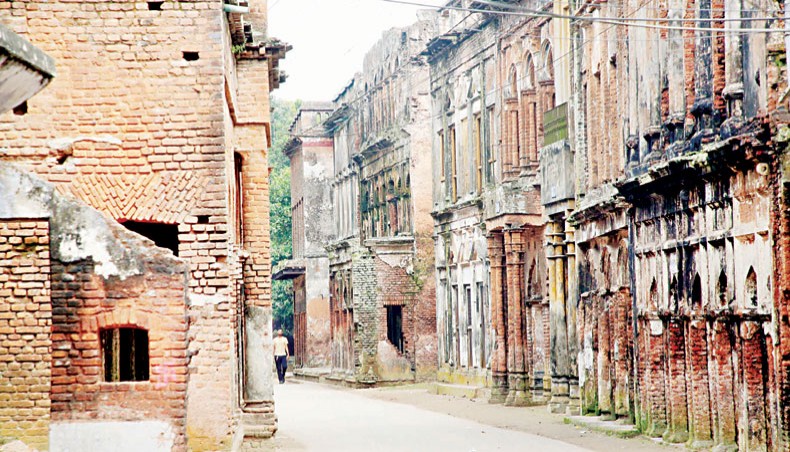 The government has failed to make a complete list of the historical sites and heritage buildings that are gradually disappearing for lack of conservation measures.

Many buildings and sites bearing the histories of the people and their culture already turned into ruins while many others are facing gradual disappearance.

None of the 518 sites listed by the archaeology department and 74 others by Rajdhani Unnyan Kartripakkya is well conserved and with many of the buildings, the architectural, aesthetic as well as the historic value are regularly being undermined in the name of restoration, while several others have been eclipsed by high-rise buildings built next to them.

During the restoration of the 12th century Buddhist temple in Paharpur, Bara Sardar Bari in Sonargaon built in the Mughal period, Ahsan Manzil in Dhaka built in 19th century and Tagore’s Kuthibari in Kusthia, the archaeology department distorted the original features of these sites, said historians, architects, archaeologists and campaigners.

They said that the government also constructed new buildings adjacent to many heritage sites as is the case with Lalkuthi at Sadarghat and Musa Khan Mosque at Dhaka University, while the authority also allowed development of high-rise buildings which now dwarf the Chhoto Katra, Boro Katra and several other well-recognised sites in Old Dhaka.

‘Hundreds of other privately-owned historical buildings are also facing disappearance as the owners are developing high-rise buildings ignoring the High Court orders while the government continues to allow influential locals, politicians and businesses to carry on with such development activities,’ they said.

Disappearance of the age-old buildings and sites that are valued for their magnificent and distinct characteristics linked to the Pala, Sultanate, Mughal and British architectural heritage and the attendant history of the people in the region will alienate them from their context, they lamented.

‘It’s a comprehensive collective failure that we could not make a list of the heritage sites of the country and failed to conserve those,’ Jahangirnagar University archaeology professor Sufi Mustafizur Rahman said.

‘The Antiquities Act 1968 stipulates that the government will recognise old buildings, monuments, sites or any other relics connected to past human activity and are aged over 100 years having historic, architectural, aesthetic, social, religious or communal values as heritage sites and will preserve those,’ he said.

Conserving and protecting the heritage sites is a constitutional obligation and being a signatory to the 1972 World Heritage Convention, Sufi said, Bangladesh is committed to the global community to conserve heritage sites.

‘By destroying heritage sites we are also destroying the tourism sector which can thrive through conservation, he said, adding, ‘Many other countries in the world were attracting tourists through programmes cantered on their heritage sites and are also compensating the owners of such sites in different ways.’

‘Though the archaeology department is supposed to make the list of heritage sites, we saw RAJUK carrying out the task in Dhaka and the agency took the liberty to amend the list several times to give benefits to the private owners,’ he said.

Under the pressure of activists and experts, the government in 2008 formed a heritage committee and a list of 93 buildings, four roads of Farashganj, Shakahri Bazar, Tanti Bazar, Panitola, Paridas and Hemandra Das roads of Sutrapur and Ramna area’s Mintu Road, Hair Road and Park Avenue was published by RAJUK in 2009.

Sites that were dropped from the list under pressure of the locals are Buckland Bund of Sadarghat and Farshganj, Tanti Bazar, Shakhari Bazar and Ramna areas, RAJUK officials said, adding that the Government Officials’ Hospital in Nimtoli was dropped in 2020.

Recently, they said, the government came up with the Old Dhaka development plan creating rooms to building high-rises, replacing buildings dating back to the Sultanate, Mughal, and the British periods.

Instead of developing tourist zones in Old Dhaka by preserving the historical and cultural heritages, Nisar said, government officials were helping the owners to demolish these buildings.

Nisar, also a trustee of Bangladesh National Museum, said that the terracotta relief sculptures on the walls of the 12th century Buddhist monastery in Paharpur went missing during restoration and were later sold on the black market.

During restorations, he said, aesthetic values of the Bara Sardar Bari, Puthia Rajbari, Tagore’s palace and Ahsan Manzil were ruined.

A High Court division bench in October 2018 ordered the archaeology department to make a list of heritage sites based on the Urban Study Group’s list of 2,200 buildings of Old Dhaka and asked RAJUK to take measures to ensure their protection.

‘The High Court division asked the archaeology department to submit progress reports every three months, but that was ignored,’ said Taimur Islam chief executive officer of the USG.

Ignoring HC division’s suo motu rule passed in 2017 imposing restriction on the demolition of Building no 135 at Shakhari Bazar, Taimur said, and added that the owners demolished it last month.

‘The police did not help, though we approached the local police stations with the High Court orders in both cases,’ he added.

Owners also demolished Holding No 6 on Hemnda Das Lane, a mosque at the Modan Saha Lane, building No 67 in Tanti Bazar and building No 30/1 on Subhash Basu Avenue in violation of the HC division’s 2018 orders, Taimur said adding that 10 more such houses would be demolished by their owners ignoring the HC orders.

Instead of conserving, Taimur said, the government turned the historic Manglabas into a dormitory, converted the Rebati Mohan Das’ resident at Sutrapur, a recognised site, into an office of fire service and another well-known site, Ruplal House in Farashganj, into residents of civilian employees of the army.

Enayet Hossain Maruf, one of present owner of the Niki Pogose house said that he demolished the house as the HC division’s suo mato rule was not in effect as RAJUK’s latest gazette did not recognise it as a heritage building.

‘Now we have all the rights to redevelop it,’ he said.

The owner of holding No 135 at Shakaribazar, Nanda Dulal Thakur, could not be reached for comments.

Advocate Ashik-Al-Jalil, who filed several cases for USG in the HC, said, the act of demolishing, not protecting and even not making the list of the archaeological sites in Dhaka were in violation of the HC orders and these people should be held liable for contempt of court.

The deputy commissioner of Lalbagh zone Biplab Bijoy Talukder said that he was not aware of the withdrawal of assistance by the local police in saving heritage buildings.

Tanti Bazar Jagannath Mandir steering committee president Babul Dash, a Shakahri Bazar resident Debashish Biswas, also former president of Shechchhasebak League of Dhaka City South unit and a Saifuddin Ahmed Milan, a presidium member of Jatiya Party, who purchased a historic building in Farashganj, said that they had approached the government to drop privately-owned buildings from the heritage list in 2017.

RAJUK director (development control) Mobarak Hossain said that they amended the heritage lists following the instruction from the government high-ups.

He denied the allegation that RAJUK helped developers while they demolished ancient buildings. He also claimed that RAJUK would soon introduce an alternative compensation policy pertaining to privately-owned heritage buildings.

‘We sent letters to the fire service and Bangladesh Army to vacate the listed heritage sites and fighting legal battles to evict occupiers of the Boro Katra,’ Hannan said.

‘The law doesn’t allow us to declare a building as a heritage site unless the owners give consent. In such cases, we have to acquire those buildings,’ he said.

Hannan Mia admitted that some malpractices had transpired during restoration. ‘We have rectified the problem. We also placed a project for conserving the sites and developing tourism surrounding those sites,’ he said.

The splice is right for Aspen’s Silver Queen