A ball boy at the Australian Open said one of the worst things about the job is having to deal with disrespectful tennis players.

Kia ball kid Charlie Brady, who has been on the court during the Australian Open in Melbourne, said he has had tennis players yell at him.

Talking to Karl Stefanovic and Allison Langdon on The Today Show, Charlie said the worst thing about being a ball kid is embarrassing himself on the court.

When asked if some of the players were demanding on the court, he replied: ‘Some of them are just disrespectful’. 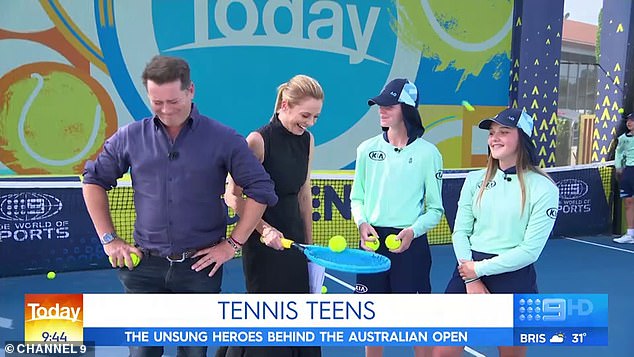 The hosts laughed at the honesty and asked him who the nicest players on the court were.

Meanwhile, fellow ball girl Sami Lane said Djokovic was also nice: ‘He gives the rubbish over and says a big and enthusiastic thank you.’

Langdon asked Sami what she thought of Rafael Nadal kissing a ball girl on the cheek after he accidentally fired a brutal shot to her head.

The Spanish tennis star was steaming towards a straight sets victory during his round two victory over Argentina’s Federico Delbonis when a wayward forehand shot down the sideline and smashed into a ballgirl’s face.

Nadal immediately left the baseline to come to the ballgirl’s aid and gave her a kiss on the cheek.

Sami told the morning show hosts she wished she was the girl who was hit in the face. 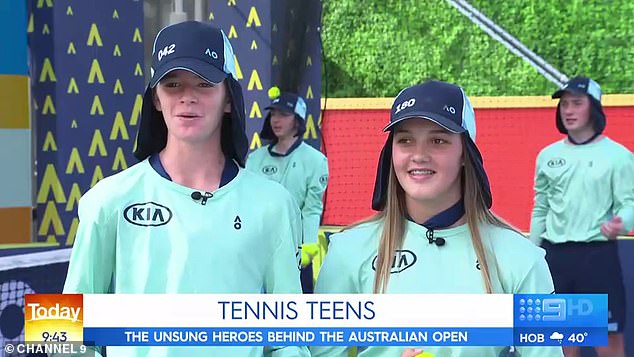 Fellow ball girl Sami Lane (right) said Djokovic was also nice: ‘He gives the rubbish over and says a big and enthusiastic thank you’ 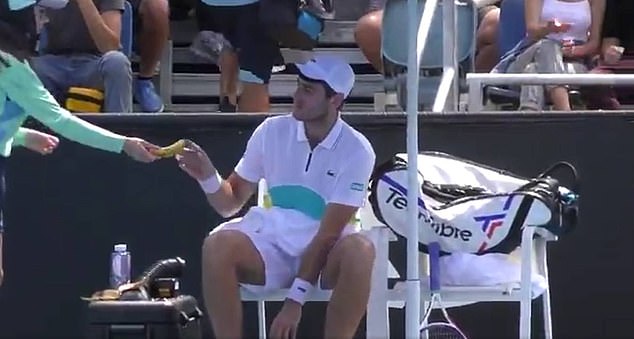 ‘I must say I would any day any time take ball to the face to get a kissed by him, but that’s alright. Didn’t happen to me,’ she joked.

The ball kids at the Australian Open have had to deal with a number of weird requests from tennis stars.

Most notably was when World No. 229 Elliot Benchetrit asked a ball girl to peel a banana for him.

The Frenchman sat court-side duing a break when the ball girl presented him the banana, before he asked to peel it for him.

Umpire John Blom wasn’t having any of it, telling off the tennis player who went on to open the fruit with his teeth. 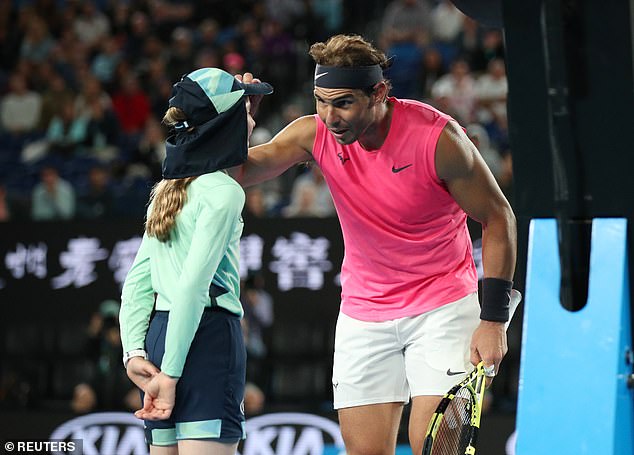 Nadal hit a brutal forehand into a ballgirl’s face, and immediately rushed to her aid

Ash Barty was praised for checking on a young ball girl after she tripped on centre court in front of a packed crowd.

The crowd can be heard gasping as the youngster tumbled off-camera while retrieving a ball before applauding as the girl quickly got to her feet.

‘Are you alright?’ a concerned Barty asked the red-faced youngster on the sidelines before serving.

‘Pretty much right after AO ends we have a big try out and training period, so it goes pretty much the whole year until AO comes around,’ Sami explained.

After they try out, the ball kids have six to seven training sessions and they are then dispersed into different tournaments. 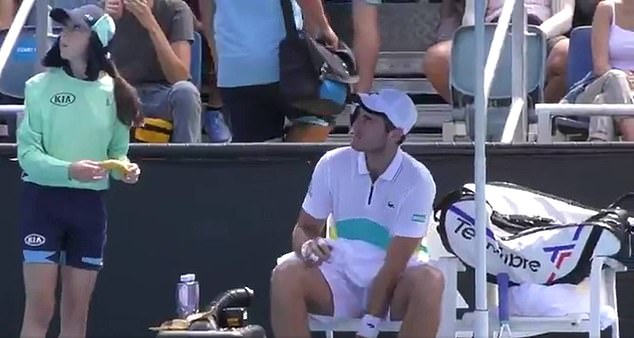 Serena Williams and Her Wimbledon Wins With The ‘Big Four’