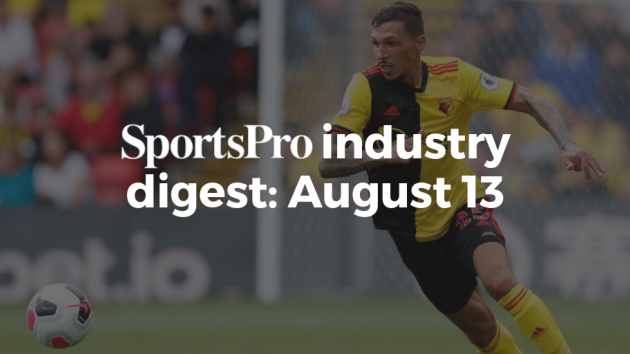 The 80 square metre screens, positioned at either end of Vicarage Road, will provide fans with a clearer view of the action, while also providing replays, match stats, pre-match build up and, new for 2019/20, Video Assistant Referee (VAR) decisions.

Scott Duxbury, Watford’s chairman and chief executive, said: “We continue to make a number of improvements to the stadium infrastructure here at Vicarage Road, and this innovative solution – given our ambitious stadium development plans – meant that we can continue to deliver a great visual experience to our supporters.”

Geraint Williams, ADI’s chief executive, added: “Lifting a ten ton screen, the length of two double decker buses, over houses and the stadium roof is not without its challenges. However, in overcoming those challenges, and achieving what most would consider to be impossible, this has been one of the most rewarding projects we’ve delivered in recent years.”

GVC Holdings, the parent company of gambling firm Ladbrokes, will be removing several of their sponsorship assets across the Scottish and English Professional Football League, including interview backdrops, as well as static and LED boards, for the 2019/20 soccer season. Instead, it will give the space to GambleAware’s ‘Bet Regret’ campaign.

Staying with betting, SportPesa has pulled out of all its sports sponsorship deals in Kenya due to an ongoing tax dispute with local authorities. The decision does not affect its partnerships with teams outside the country, which includes English soccer club Everton and Formula One’s Racing Point team.

In soccer, Italian soccer club Fiorentina has announced telecommunications service provider Mediacom as its official shirt sponsor for the 2019/20 campaign, which had sponsored the team during pre-season.

William Hill has penned a deal with Spanish second division soccer club Real Oviedo, where it will feature on the back of players’ shorts during games.

Insurance company ONE Versicherung will serve as the sleeve sponsor for newly promoted Bundesliga soccer club Union Berlin for the 2019/20 season.

Kumho Tyre is the new premium partner for Bayer Leverkusen on a two-season deal. The tyre manufacturer will also be the sleeve sponsor for the German soccer club when it competes in the DFB Cup, the domestic cup competition.

Second-tier English soccer club Leeds United have announced a partnership with US-based company Wish for the 2019/20 season, with the ecommerce platform becoming their official presenting partner.

Getafe has joined fellow Spanish soccer club Valencia in naming Libertex as sponsor, with the trading platform to have branding on the front of Getafe’s shorts in domestic fixtures and on the front of the team’s shirts in the Uefa Europa League.

At Edgbaston, the English international cricket ground and home to Warwickshire, a new partnership has been struck with menswear brand Luke until the end of 2019, giving the brand marquee sites within the stadium bowl.

Kellogg’s has entered esports through a new partnership with N3rd Street Gamers (NSG) and will sponsor their National Championship Series tournament with its Cheez-It Grooves product.

Home improvement retailer Lowe’s has signed an expanded sponsorship agreement with the National Football League’s (NFL) Carolina Panthers, which includes a branded entrance gate at the Bank of America Stadium.

In Australia, the National Basketball League’s (NBL) Perth Wildcats have inked a two-year extension with Tyrepower. The company’s branding will feature courtside at the RAC Arena through LED signage and floor decals.

The National Women’s Hockey League (NWHL) has signed a one-year deal with Chipwich to become the official ice cream sandwich of the US-based league.

Rugby Australia has announced Ola as the official rideshare partner of the men’s national rugby union side.

English top-flight rugby union outfit Leicester Tigers will continue their partnership with Holland & Barrett for the Premiership Rugby 2019/20 season. Having branded home and alternate shirts since 2016, the health and nutrition company has now also been named the team’s official sport nutrition supplier.

Spanish telecommunications company Telefonica has renewed its rights deal with agency Mediapro to broadcast a range of live sports in public places, such as bars and clubs, for the 2019/20 season. This includes La Liga matches, as well as Uefa Champions League and Europa League games featuring Spanish teams. Matches from the National Basketball Association (NBA) and Women’s National Basketball Association are also included in the contract.

South African free-to-air (FTA) broadcaster OpenView has struck a deal with Infront to show one live English Premier League match per week on its News and Sports channel over the course of the 2019/22 rights cycle.

Eurovision Sport, a division of the European Broadcasting Union, has secured the European broadcast rights for The Match – Europe v USA athletics event, which takes place from 9th to 10th September.

Global sports streaming service Fanseat has renewed its production and distribution partnership with the French Ice Hockey Federation (FFHG) through to 2024.

BeIN Sports, the pay-television operator, lost over 800,000 subscribers in France over the final six months of 2018, according to newly-emerged figures seen by the Libération newspaper.

Cars24, a Gurugram-based tech-enabled used car company, has announced a strategic partnership with Indian cricket star MS Dhoni. The wicketkeeper batsman will act as its brand ambassador and will own equity in the firm.

The 2022 Commonwealth Games in Birmingham is set to be the first major multi-sports event to have more women’s than men’s medal events after Women’s Twenty20 cricket, beach volleyball and Para-table tennis were added.

English second-tier soccer club Huddersfield Town have been charged by the Football Association (FA) with breaking kit and advertising rules. It comes after bookmaker Paddy Power’s logo was displayed in a large sash across the club’s shirt in a pre-season friendly as part of its ‘Save our Shirt’ campaign, which the FA says was in breach of regulations surrounding the size of slogan allowed on a player’s shirt.

National Hockey League (NHL) side the New York Islanders have received unanimous approval from New York Arena Partners Empire State Development for their new Belmont Park Arena. The US$1.3 billion venue is expected to open in the fall of 2021.