The race for Europe hots up with Bohemians being chased by Derry City and St Patrick’s Athletic for the top three spot.

If Shamrock Rovers or Dundalk win the FAI Cup, fourth place will be enough for a Europa League spot and Bohs too could claim the trophy. But they have been riding high in the league all year and Keith Long will want his men to earn it in style.

Waterford are a result or two away from safety, with Finn Harps needing a very good run to get close to the Munster side. They could all but guarantee their place in the division with  win here.

Waterford: Zack Elbouzedi returns from international duty with the Republic of Ireland Under-21s but the Blues have a number of injury concerns ahead of the game with John Kavanagh, Dean Walsh and Karolis Chvedukas all out, while Kenny Browne and Cory Galvin are big doubts.

Alan Reynolds (Waterford manager): “There’s been very little between ourselves and Bohs in the games so far this season. We drew both home and away and they snatched an injury-time winner the last time in the RSC, so we’re going for the win. I know Keith and Trevor well and they’re pushing hard for that third spot. Keith was down watching us on Monday so no doubt they’ll be well prepared too. It’s up to us to put the performance in.” 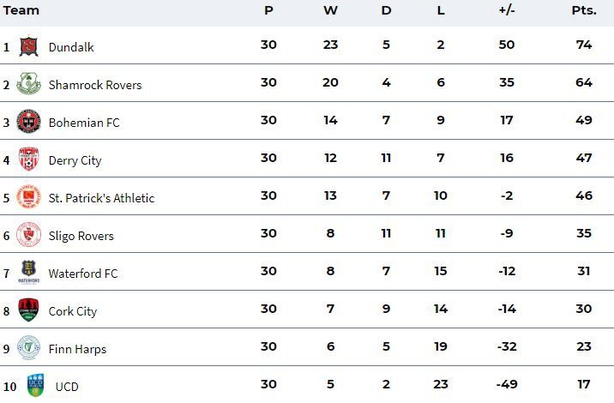 It was a good start for Stephen O’Donnell in his first game as a manager. Victory in Ballybofey over Finn Harps moved the Inchicore side to within three points of a guaranteed European place. This is a must-win game to keep up that chase.

It is the same scenario for UCD but their hopes of staying up are fading with each week. A defeat in Sligo last week in the FAI Cup was as much to do with inexperience and individual errors than anything else. It’s hard to see them changing that in Richmond Park after just one draw and 13 defeat in 14 away matches so far.

St Patrick’s Athletic: Pat’s are boosted by the return of striker Mikey Drennan from suspension which means O’Donnell has a full squad to select from.

UCD: Jack Keaney is suspended and Evan Osam will miss out with an Achilles injury.

Stephen O’Donnell (St Patrick’s Athletic manager): “I’m really looking forward to my first game in Richmond. UCD are a dangerous team and have a lot of good players in attacking areas, so that is one thing we have to be guarded against. We have to give them total respect.”

Time is running out for Finn Harps to drag Cork City and Waterford into the relegation zone and their next two games, starting in The Showgrounds and then a trip to Cork City, will have a massive say. Failure to win at least one of the game will consign Harps to a play-off at best.

Sligo’s season has been dramatically altered by an FAI Cup run. Their league season is about hanging onto sixth place and building some confidence ahead of a semi-final in two weeks.

Sligo Rovers: Lewis Banks, David Cawley and Dante Leverock are suspended. Johnny Dunleavy will have a late fitness test on an Achilles problem.

Finn Harps: Niall Logue joins Ciaran Gallagher and Michael Gallagher on the injury list. Mark Russell returns to the squad after missing the Pat’s match due to suspension.

Liam Buckley (Sligo Rovers manager): “We’re top of the bottom five and we’d like to stay there. Finn Harps have caused us plenty of problems this year. They turned us over in the league and cup away from home and we just managed a late draw against them here. We’re in for a hard night. They will feel this game is vital in the year but my concern is how we get on and maintaining what has been a strong home record. We’ve lost four games here all season and we’d like to keep it that way for the end of the year.

Ollie Horgan (Finn Harps manager): “We will have to be stronger in every way to get a decent result in the Showgrounds. We gave away two poor goals on Friday night against Pat’s and paid dearly for that.  It was very disappointing that we couldn’t lift ourselves to really test them after that. The closest we came to an equaliser was Daniel O’Reilly’s shot in nearly the last action of the game. As we always do, we have moved on and really now need a big response from the players.” 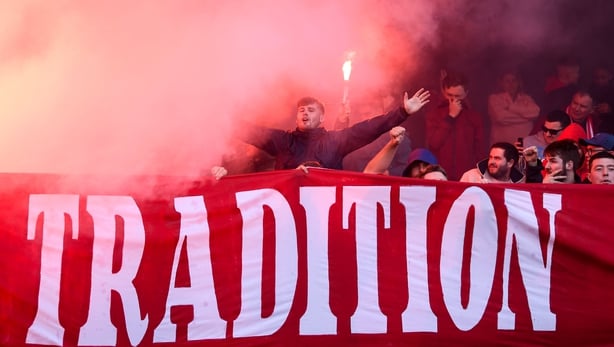 The sold out signs are up in United Park for the game of the night. Shelbourne looked to be heading for automatic promotion and in truth, given their budget, it probably should have been wrapped up. But Drogheda have closed to within three points ahead the penultimate game of the season.

United need a win, knowing there is little to no chance of Shels dropping points on the final day against Limerick. If they can manage that, it will leave Tim Clancy’s charges just one victory away from what would be a remarkable league win. Around 2,200 fans will be present for what promises to be a cracker..

Ian Morris (Shelbourne manager): “They score a lot of goals, while conceding a lot as well. They look to outscore the opposition but you see the last couple of games between us have been close competitive games. We’ve approached this game as we have every other game, nothing has changed, we’ll be looking for three points as we would every game.”

Highlights of all games will be on RTE2 after live coverage of Bohemians v Waterford (7.30pm)