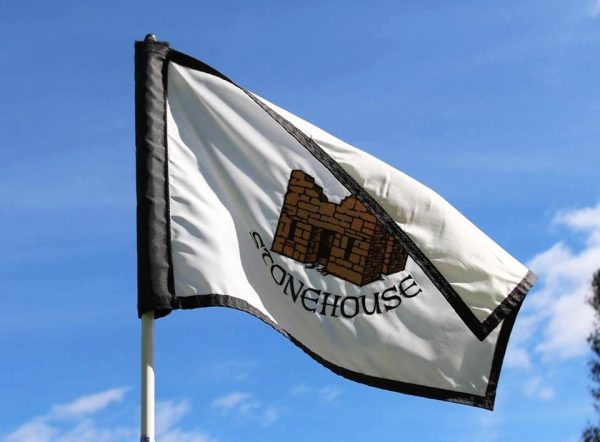 An area golf course has been brought back from the dead, but it’s not fully out of the woods.

Stonehouse Golf Club in Toano quietly reopened for play in late June after being shuttered and in disrepair for two years.

Joe Sanders, an area resident, avid golfer and owner of his own construction company, bought the course for $800,000 in December, with plans to pump an estimated $1.4 million into repairs and renovations.

Sanders said that number is still in flux and still rising, as Mother Nature has proved a formidable foe to the revival of Stonehouse’s greens. 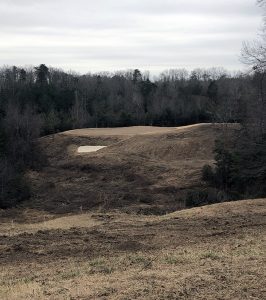 A January photo of hole no. 15 after being cleaned up by Sanders’ crew. (Michael Schwartz)

“The course overall is doing well,” Sanders said last month. “But everybody grades a golf course according to their greens, and that’s been our problem.

“The greens ended up being a bigger challenge than we anticipated,” he said. “It’s hard when the rest of the course is beautiful.”

Sanders said he and the Stonehouse crew have been through several rounds with nature in recent months on the greens – and the score is a bit lopsided.

First came the crabgrass, which sprouted after they replanted the bent grass greens, Sanders said. Crews sprayed to kill the crabgrass, but the chemicals took a toll on the fledgling greens, which already were battling the summer heat.

Crews replanted the greens for a third time and that’s when the goosegrass reared its ugly head. Sanders said they then opted for a more natural approach to eradicate the weed.

“We’ve been out on our hands and knees cutting the goosegrass off,” he said.

And don’t forget about the gang of skunks that were digging up the greens at night – and the burrowing bees.

“We’ve had a lot of obstacles to get by,” Sanders said.

The course nevertheless has been operating on a sort of extended soft opening since late June/early July, with Sanders discouraging large volumes of rounds until he gets the greens in better shape.

That hasn’t stopped folks from coming out regularly. Sanders said Stonehouse has signed up 65 members, some of whom have volunteered their time to help with maintenance.

“They’ve been loyal. They’ve been out helping with cutting,” Sanders said of the members. “We’ve got some guys here who really want this place to succeed.”

Even a soft opening with subpar greens is a far cry from where Stonehouse was when Sanders swooped in last winter.

Sanders was betting that the combination of the $800,000 price tag and his ability to use the construction crews from his general contracting company, J. Sanders Construction Co., would help make the purchase of Stonehouse a sound investment. The price he paid was a far cry from the $5 million Traditional paid for Stonehouse in 2001 and the $16.3 million a previous owner paid in 1997, a year after it opened.

But the extra greens maintenance has tacked on unanticipated costs beyond the expected renovations that Sanders and his crews completed before the opening. That included redoing all the sand traps, work on the drainage and irrigation systems, fixing the slope on cart paths and removal of hundreds of trees.

“I’m still putting money in,” he said. “It’s far from paying for itself yet.

“I knew there would be some unknowns. I just didn’t know it would be this tough.”

But Sanders remains optimistic. With the rest of the Mike Strantz-designed course in good shape, his staff in place and the restaurant overlooking the 18th green up and running, he said he’s confident they’ll finally conquer the greens soon and host a proper grand opening in the next month or so.

“I think we see the light at the end of the tunnel,” he said.