Ducati star Andrea Dovizioso kept Marc Marquez at bay as he took the chequered flag in the Qatar curtain-raiser.

But his victory was marred by furious protests from rival teams about a winter bodywork tweak to the Desmosedici bike.

Honda, Suzuki, KTM and Aprilia all lodged a complaint with the FIM MotoGP Stewards Panel against the addition of a rear winglet.

Ducati’s rivals believe the primary purpose of the winglet is to generate additional downforce.

Ex-Ferrari F1 engineer Toni Cuquerella agrees with the other teams’ views and had some words of warning for sport’s governing body.

“First of all, because any part that’s exposed the way that one is produces it, and it could even help reduce the bike’s drag.

“You have to keep in mind also that the effect it creates has a direct impact on the rear end.

“Since it’s attached to the swingarm, the airflow must not be passing though any other part of the bike.

“The problem is that the way the rules are written, you open a Pandora’s box because there might be no specific way to ban it.”

The Ducati winglet debate rumbles on amid news of:

– Cal Crutchlow being labelled ‘heroic’ for doing this 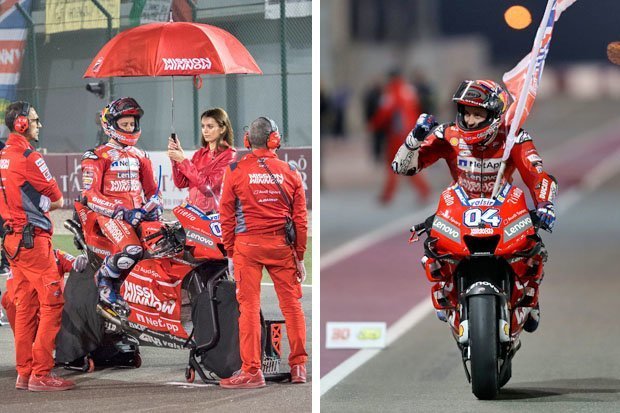 Andrea Dovizioso took the win for Ducati in the desert (Pic: GETTY)

Cuquerella, now chief engineer of the Mahindra Formula E team, believes MotoGP could have a serious problem on their hands if they don’t address the situation.

“The FIM now faces the need to clarify the situation,” he added. “It appears obvious that Ducati is ahead of the rest in terms of aerodynamics, and that they were very smart in how they interpreted a void in the rules.”

“Probably less than the winglets on the fairing, but of course it generates downforce.”

In F1, aerodynamics have had a major impact on the performance of the cars for the past 30 years.

“In motorcycling, the impact is smaller, so it’s normal that FIM is not used to dealing with this kind of cheekiness,” Cuquerella concluded.

“But even in F1 there have recently been cases where a loophole in the regulations allowed a smart team to interpret the rules in such a way that it managed to use something that it was initially banned.

Kai Warner has taken the men’s division in the Great Lakes...