Who do you think you are, Lewis Hamilton? Czech police hunt for driver of a Formula 1-style racing car after it is filmed overtaking traffic on a MOTORWAY

By Emily Webber For Mailonline

A Formula 1-style racing car was spotted speeding down a motorway before cutting in front of a car.

The red racing car was seen on the D4 motorway, in Příbram, Czech Republic, with a number seven on the rear wing and logos of Formula 1 sponsors Marlboro and Vodafone. 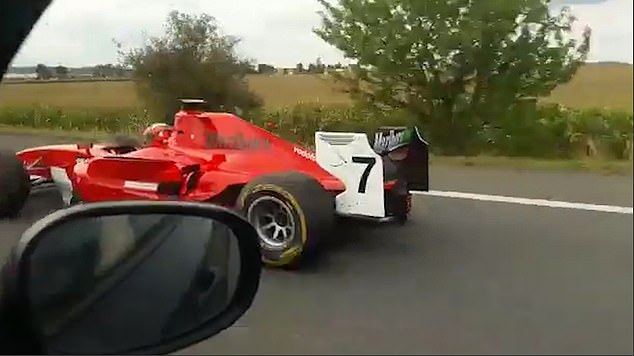 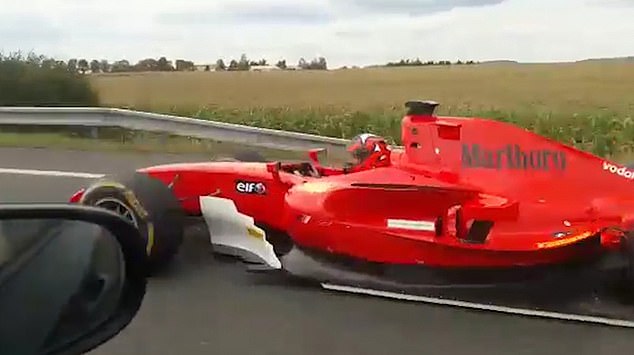 A driver overtook the red racing car on the D4 motorway to catch better footage. The racing driver was wearing a red helmet and matching race suit

Video footage shows the driver hurtling down the motorway in the overtaking lane before cutting in front of a car.

Seconds after, a red sports car zooms down the motorway and pulls behind the racing car.

The driver of the single-seater racing track is seen wearing a red helmet and a matching race suit as he drives on the unlikely track. 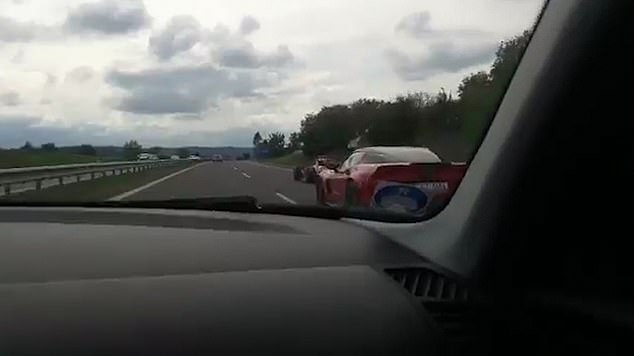 The driver overtakes a red sports car on the motorway, which is behind the racing car, to catch a better look of the unlikely motorway vehicle

The D4 motorway stretches 26.7 miles from Strazny in the south to the capital, Prague.

Formula 1 racing cars are custom-designed for their driver and cannot be driven legally on public roads without substantial modifications.

In order to be road legal a formula 1 car would need changes such as sufficient ground clearance, a rear view mirror, suitable suspension and lights.

A new set of tyres would also need to be fitted every 20 miles, dependent on the road conditions, and a new engine would be required for every five hours of non-stop driving.

Police appealed for witnesses, anyone who knows the driver, or people who filmed the racing car to contact them.

It is unclear when the car was on the motorway, however officers have a number of recordings filmed by drivers.