The new safety regulations, aimed at curbing the number of scooter-related accidents, will go into effect in September. 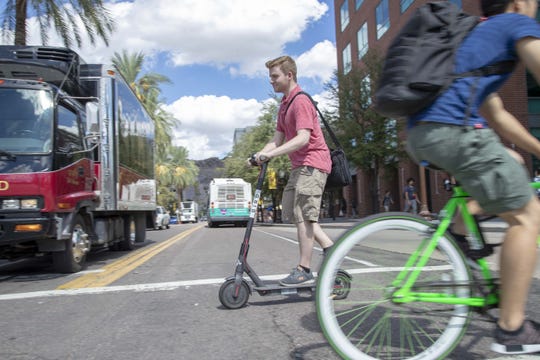 Nick Walker rides a scooter Oct. 4, 2018, in Tempe. Tempe is debating whether to begin regulating the shareable bicycles and electric scooters that are now prolific in downtown Tempe and at Arizona State University. (Photo: Nick Oza/The Republic)

Scooter riders and cyclists in Tempe soon will have to adhere to new safety regulations.

The Tempe City Council unanimously approved new safety rules aimed at curbing the number of scooter-related accidents in the city after several companies have parachuted in thousands of electric scooters since May 2018.

Earlier this year, a 20-year-old man was critically injured after being hit by a car while riding a scooter as he crossed Baseline Road just east of Kyrene Road.

Emergency room staff at Tempe St. Luke’s Hospital have reported seeing about one to two people a day in the ER with scooter-related injuries. The Tempe Fire Department reported responding to 119 scooter-related accidents that resulted in injuries from June 2018 through December 2018.

Rules include requiring helmets for users under age 18 and barring users from riding on sidewalks in some cases.

The rules, which had earlier been criticized by some members of the cycling community for being too strict, were met without opposition Thursday.

“After months of work and public input, I am thrilled that the council unanimously supported these new rules,” Council member Randy Keating said. “When these new rules take effect, Tempeans will be safer than they were before, and that was the whole goal.”

Tempe Police Lt. Jim Peterson had previously told the City Council that officers will be on the lookout for unsafe behavior. The department requested additional funding in this year’s budget to hire two traffic officers to help with enforcement.

The department is also working with the scooter companies, Arizona State University and local school districts to develop an education campaign.

The rules, which first were presented to the Tempe City Council in May, include: