This is the shocking moment a finance worker is flung backwards off his bike after a high-speed head on crash with another cyclist.

Craig Iles yelps in pain as he and the other man collide on a cycle path with a sickening thud.

The nasty accident, which was captured on Mr Iles’ bike mounted camera, left him with severe bruising across his buttocks.

The crash happened, ironically, on a stretch of road where council bosses are trying to make cycling safer. 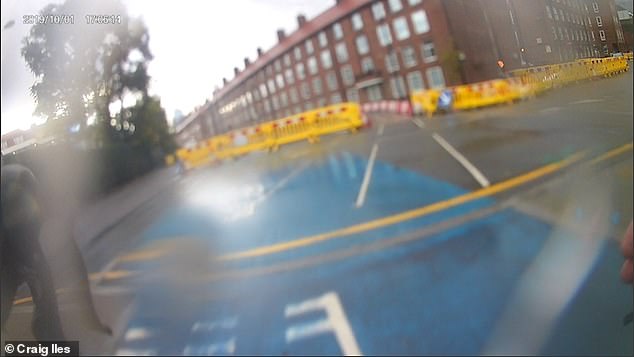 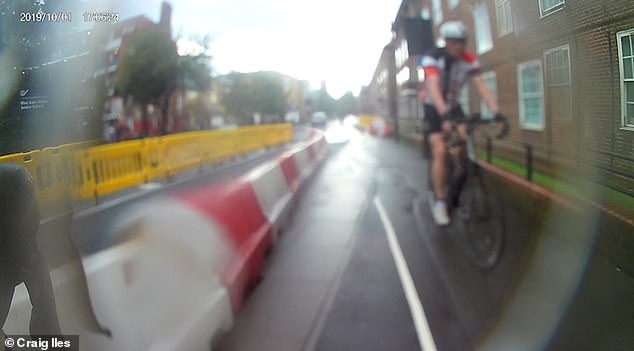 The 59-year-old father-of-two chose to go straight on. He went around a yellow barrier where council contractors are doing roadworks and continued along the cycle path 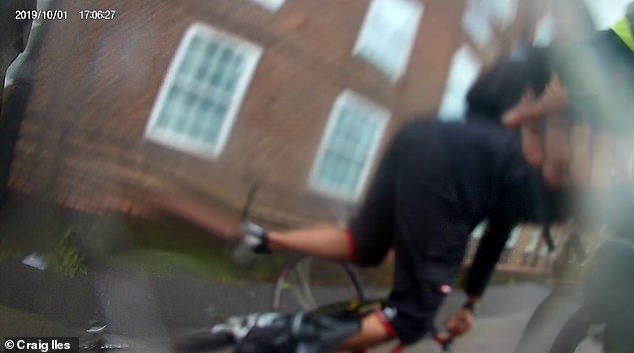 After passing several cyclists coming the other way, Mr Iles helmet camera caught the moment he smashed into a bike coming from the opposite direction

Contractors for Tower Hamlets council in East London have been working on Cable Street for the last two weeks as part of plans to reduce traffic congestion.

The proposals also include widening the cycle path on the one-way road to give more room to cyclists travelling in opposite directions after complaints it was too narrow. 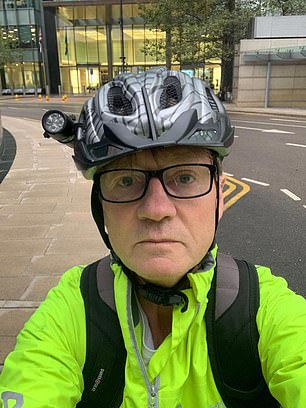 The city worker (pictured) told MailOnline: ‘It was an awful crash, really painful.’

However, as this footage shows, current roadwork barriers infringe on the left lane of the cycle path making it even tighter and creating a dangerous bottleneck.

Mr Iles, 59, is seen approaching the roadworks at 5.06pm last Monday evening. Rather than veering left to join cars going in the same direction as him down a one-way road, Mr Iles instead goes around a yellow roadworks barrier and remains on the blue cycle path, squeezing past others riding the other way.

As the path narrows further, other cyclists can be seen riding at speed from the opposite direction before, seconds later, Mr Iles can be seen ploughing into a cyclist coming the other way, sending both men crashing to the pavement.

Mr Iles had been cycling the nine miles home from his office in Canary Wharf in London’s Docklands, where he works as a money broker, back to his home in Battersea in the south west of the city.

The father-of-two told MailOnline: ‘It was an awful crash, really painful. 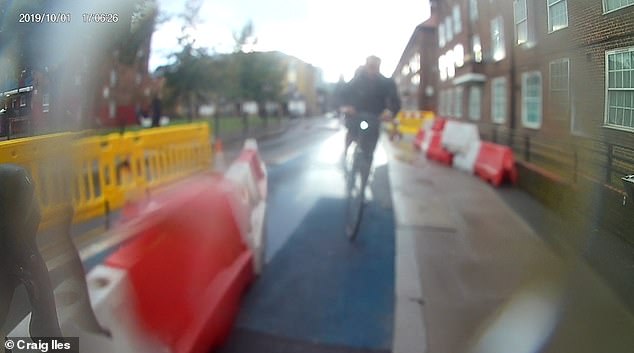 Tower Hamlets has recruited contractors to work on Cable Street, east London, in an attempt, ironically, to make it safer for cyclists using the road 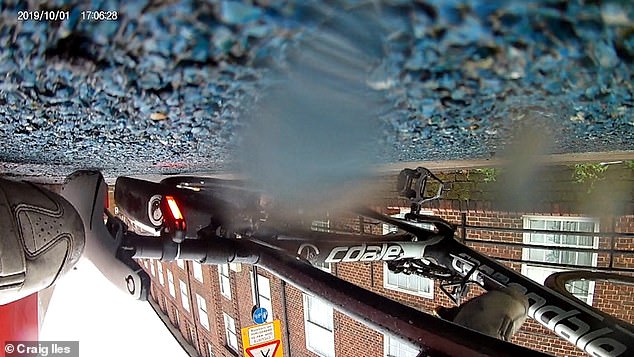 Mr Iles was riding home from his work in Canary Wharf to his home in Battersea, south London, last Mondoy evening when he smashed into a fellow cyclist 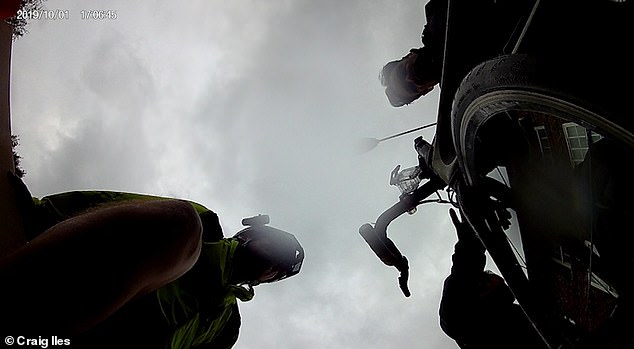 Transport for London, which shares responsibility for managing the capital’s road network with each individual borough and Highways England, has said it will now launch a probe 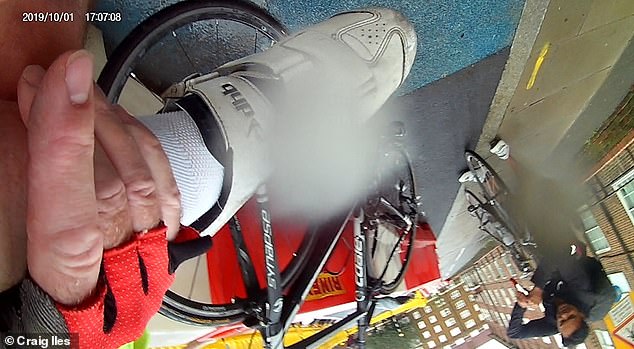 ‘I was riding past a junction where there are roadworks taking place and as a result the left lane of the cycle path is obstructed by barriers.

‘As soon as I collided with the other cyclist I was propelled backwards while he was thrown forward.

‘I was on the floor and initially managed to scramble to my feet to ask him how fast he was going and what he was doing. There were a few choice words.

‘But the pain became too much and I had to sit back down again. The other cyclist was walking about and didn’t seem too badly injured.

‘A man who lived in a block of flats nearby had seen what had happened came down to see if we were alright.

‘He told us there had been a similar accident earlier in the day and that a woman had had to be taken to hospital. 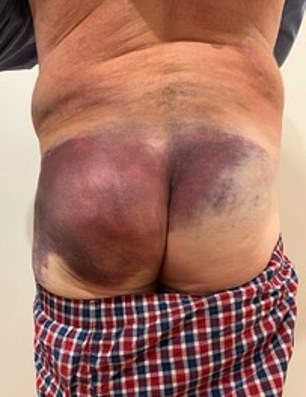 ‘The roadworks have been taking place for about two weeks and there are warning signs in place but the cycle path at one point narrows significantly and many cyclists don’t realise this until it’s too late.

‘This particular stretch of road is my nemesis as I’ve already had five accidents in the seven years I’ve been using that route, once with another cyclist, three times with cars and another time a pedestrian suddenly walked out in front of me.’

Transport for London, which shares responsibility for managing the capital’s road network with each individual borough and Highways England, has said it will now launch an investigation.

Road safety charities, meanwhile, welcomed the bid to improve cycling conditions on Cable Street but expressed concerns too that the work had reduced an already narrow cycling lane.

Joshua Harris, director of campaigns at Brake, said: ‘More and better cycle infrastructure is vital to help people get around our cities and towns in safe and healthy ways but these changes must be rolled out in ways which minimise confusion and the possibility of a crash.’

The London Cycling Campaign’s infrastructure campaigner, Simon Munk, said: ‘Roadworks are a fact of life in London – and these ones are at least for a very good reason, to improve a massively over-capacity cycle track that’s far too narrow for the number of folks who use it daily.

‘In this case, as increasingly with other roadworks in London, it looks like the contractors are trying to do a good job of keeping the cycle track open and cyclists safe while works happen.

‘But the already narrow tracks have been narrowed further. Whether that was the cause of the collision, it’s difficult to tell from the video.

‘We hope the works are completed as soon as possible, that the rest of the Cable Street section of this route also gets upgraded soon, and that this pair of cyclists are OK.’

Glynn Barton, Director of Network Management at TfL, said; ‘Our thoughts are with the two cyclists who collided, roadworks are vital but they must be safe.

‘We will work with Tower Hamlets Council to investigate these concerns and to ensure that if changes are required they are made as quickly as possible.’

Your guide to cycling in Toronto and buying a bike for...